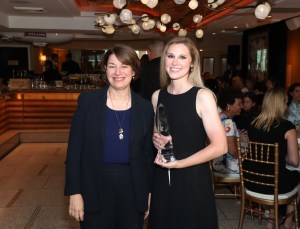 Edwards testified before the January 6th Committee last month about the chaos at the Capitol, as officers were overrun by the mob storming the halls of Congress. She described the scene on the West Lawn like a war zone.

“She was yelled at, she was tear-gassed, she was knocked unconscious and when that happened she got up and she ran back again onto the front lines. Incredible bravery,” Klobuchar said.

Murphy said that women have been an integral part of the hearings. She said, “It gives me hope and it gives me joy to see so many women finding their voice, so many women saying ‘I will not be silent in the face of injustice,’ so many women who have found the courage to continue despite threats, obstacles, and suffering.”

Magazine editor Joanna Coles, who founded the award with Paramount Global’s DeDe Lea and Microsoft’s Teresa Carlson, presented to Christine Grady, chief of the Department of Bioethics at the National Institutes of Health. Lea presented to Sheila Johnson, founder and CEO of Salamander Resorts, and Carlson to mezzo-soprano Denyce Graves.

“I was a little girl growing up in what they used to say ‘Southeast’ Washington, D.C., on the other side of the tracks, not thinking that my presence could bring about change in the world,” Graves said.

The prize honors women “who exemplify resilience, foster innovation, exhibit flexibility in times of crisis, and make a social and cultural impact.” Edwards, for instance, testified before the January 6th Committee last month on what she and other officers faced during the Capitol siege. Grady, chief of the Department of Bioethics at the National Institutes of Health, has been a leading voice on the ethical challenges surrounding the Covid crisis.

Others to be honored include mezzo soprano Denyce Graves and actress, singer and activist Melora Hardin, as well as Sheila Johnson, the founder and CEO of Salamander Hotels and Resorts and partner at Monumental Sports & Entertainment. The event, executive produced by Haddad Media, will be held at Cafe Milano, with a list of more than 100 women from politics, government, science and the arts expected to attend.

In a statement, Coles said, “Every single one of these women has led by example and made an impact on our world. They have not only inspired us, but collectively, they’ve touched the lives of millions of people in this country and around the globe. We are honored to showcase their accomplishments.”